The ‘Mach Loop’ is named after the area around Machynlleth, Wales and is officially named LFA7 (Low Flying Area). It is one of the authorised military low level flying training areas and used by the RAF, USAF and any visiting foreign air forces to practice manoeuvres at around 250ft above ground. This is essential to maintain operational capabilities.

There are several places to view the low level training, but the most popular is just outside Dolgellau. Here there are two areas which are directly opposite each other, by the side of Cadair Idris. The two areas are know as ‘Cad West’ and ‘Cad East’. Both areas allow for very close viewing of the aircraft but offer different advantages.

Cad West – the aircraft approach from your left (as Mach Loop is ‘one way flying only’) and as they enter the narrow valley between Cad West and Cad East, they bank. This gives head on views, and views from above of the top of the aircraft or eye level views depending on their height. 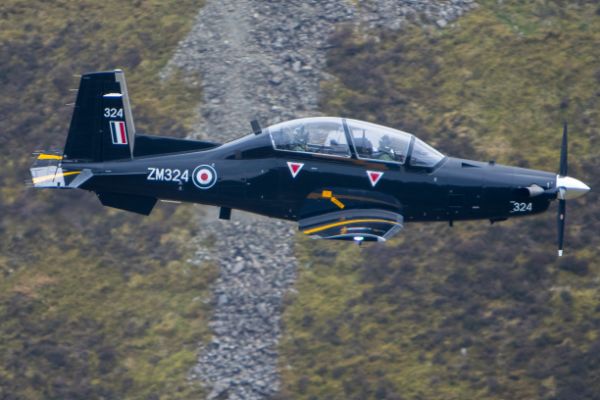 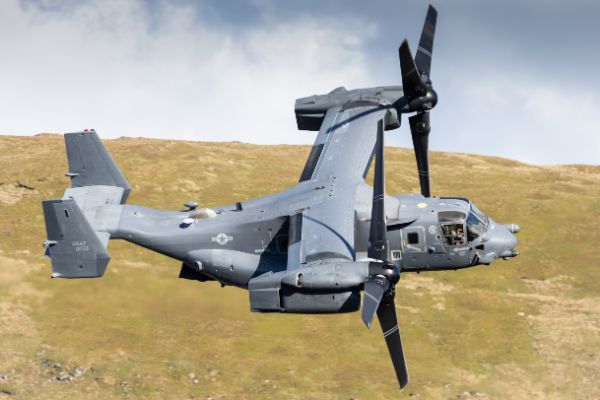 Cad East – the aircraft approach from your right and as they bank, you will get either belly views or directly down into the cock pit. 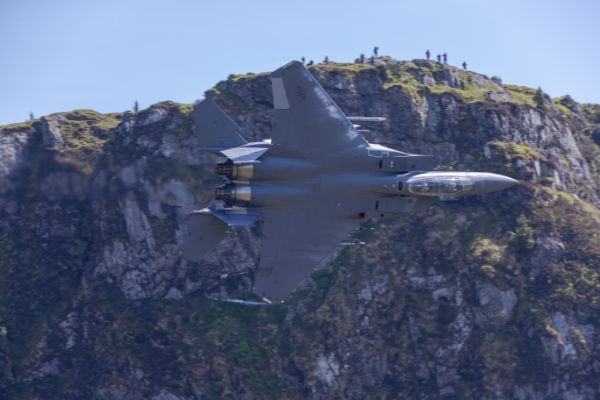 USAF F-15 Strike Eagle with Cad East in the background – ‘Loopers’ or spotters can be seen on the ridge behind.

These areas are good due to the fact that you can see the aircraft approach from a long way off giving plenty of time to get the camera ready. 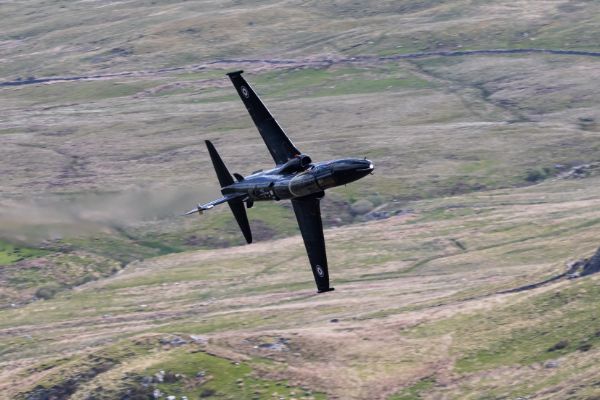 RAF Hawk approaches through the valley. 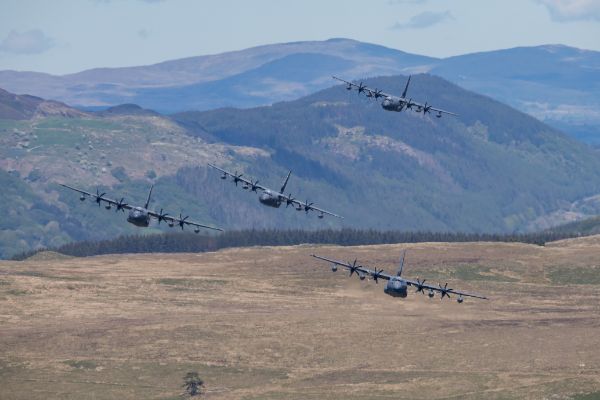 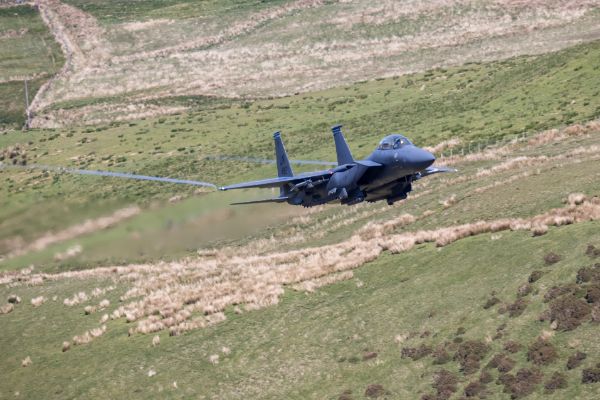 There is a lay by on the A487 which will hold around 20 or so cars and access to the viewing spots is a 20 minute walk. For Cad West, cross the stile in the car park and follow the path along the side of the road, gently climbing, once you reach the fence it’s a 90 degree left hand turn and then a steep section for about 10 minutes. For Cad East, cross the road and follow the path along the road until it turns right and then it’s a steep climb to the top.
Sturdy footwear is advised as well as a few layers of clothing. This is the Welsh mountains after all and the weather can change quickly from calm and sunny to cold, windy and wet. There is no catering, so take your own provisions.
The land is private land owned by farmers who allow access on the basis that nothing is left behind and any livestock are left alone.

The areas give stunning views along the valley towards Lyn Mwyngil. 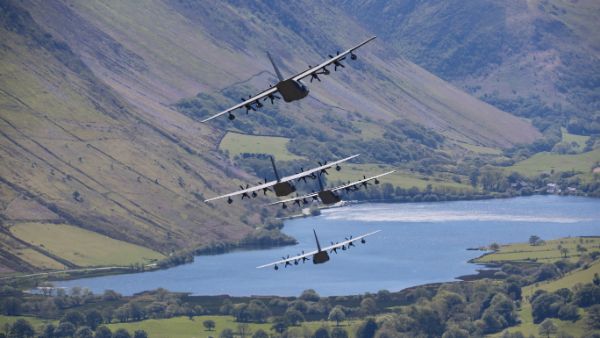 The easy part first. There is no flying at weekends or Bank Holidays. It can get busy during school holidays.

The MOD publish a weekly timetable of when the LFA7 is ‘open’ for low level training and this indicates a 1hr slot per day for the area. However, in reality, this means nothing as the area can be used at any time whilst pilots are on training missions.

The best advice would be to go for a whole day. I have arrived early and been on Cad West from 8am through to 6pm.

There is NO GUARANTEE of any flying on any day – it is dependant on weather, visibility, fuel levels and flight plans – all of which can change during the day. It is not unusual to have a ‘blank’ and see nothing, or you may wait for 10hrs and see one aircraft. On other occasions, the area may be very busy and aircraft can pass through regularly.

The main types or aircraft which use LFA7 are: RAF Hawk, USAF F-15, USAF and RAF C-130 Hercules, RAF Texan, USAF Osprey, RAF Airbus and also helicopters. Other aircraft may use it such as visiting air forces form around the World including Canadian, Dutch, Saudi and Turkish. 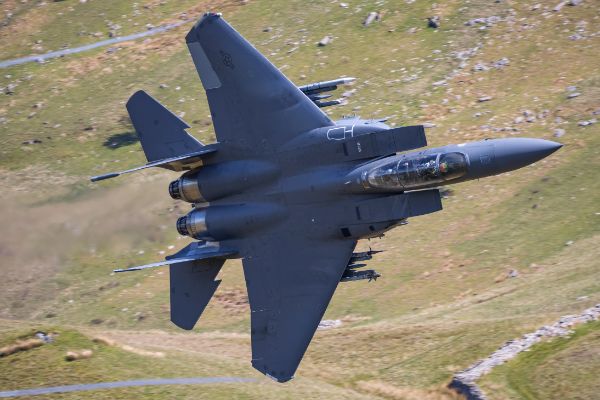 How to photograph the aircraft?

The aircraft approach at different speeds – Osprey and Hercules are slow in comparison to the jets and therefore easier to photograph. The jets fly through at high speed which makes photographing a little trickier.

I would recommend a camera with a lens of up to 400mm (longer if you have it). Zoom lenses would be better than prime as you can shoot a greater range from distant approach to close passes.

As far as settings go, the light changes quickly, the approach through the valley is a lot brighter than within the valley and this can affect exposure considerably, and this can change again if you shoot with a clear sky in the background.
I would suggest using ‘Shutter Priority’ at around 1/1200s to 1/1600s. As always, you will need as low an ISO as achievable with these shutter speeds for the best image quality, so even when there is nothing happening, it’s a good idea to keep checking exposure along various points of the flight path. Some may benefit from using AUTO ISO, but I personally prefer to change it manually.

For focussing, use Servo Focus (continuous) and have a few focus points selected (I use 5x points). Too many focus points and the camera can quickly shoot lovely shots of the valley wall, but out of focus aircraft. Too few and you run the risk of missing the target. As the aircraft approach, lock in the focus and keep it is frame, you will need to pan and zoom in as it flies past whilst shooting all the time and sometimes changing focus point areas.
If you haven’t photographed like this before, I would recommend practising before any visit – you may only see one fly past, so you don’t want to miss the opportunity for some great shots. 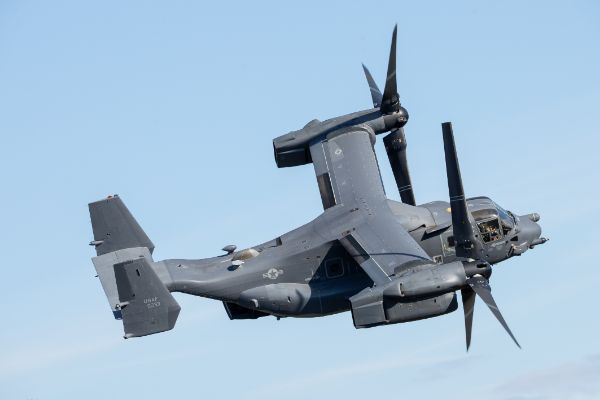 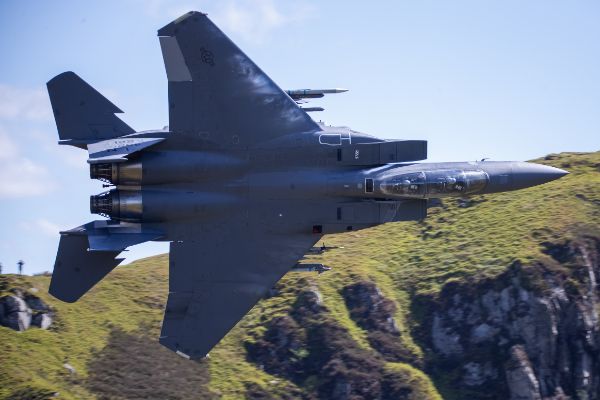 To see more images visit the ‘Military Aircraft’ Gallery on this website – more will be added following some planned trips in the coming weeks.