Animal photography can be time consuming, frustrating and difficult to grab that great shot. It can also be one of the most satisfying and can also give a real connection between the photographer and the subject. Sometimes sightings of wildlife won’t give the opportunity to capture great images due to the unpredictability of the subjects and the very nature that they are wild and not in a controlled, captive environment. Zoo’s and animal parks give easier access to some beautiful animals, but these have their own difficulties for great pictures with obstacles such as wire fencing and glass. This makes for a different challenge of photographing the subject whilst trying to create a natural feel to the picture.
With a few basic tips, chances of grabbing a great animal image can be increased. Preparation and pre-planning in terms of what and how to shoot will take a lot of thinking time away from the moment, allowing you to concentrate on that split-second chance to get the picture.

There are different types of animal image, each work well in their own right, but combining them during the shoot will mean that you’ll come back with a memorable and varied collection of shots.

Some images provide a connection through the lens with the photographer and subject whilst the shutter is being pressed. They also give a real focal point and connection for anyone who subsequently views the picture. 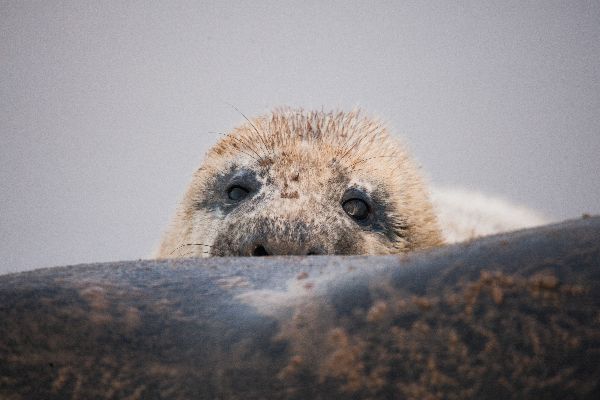 The above image is of a baby Atlantic grey seal pup who was hiding behind it’s mother. The shot was taken to capture the innocence of the pup, so eye contact was crucial. Immediately, the viewer is drawn to the pup’s eyes so it’s imperative that crisp pin sharp focus is on this point. 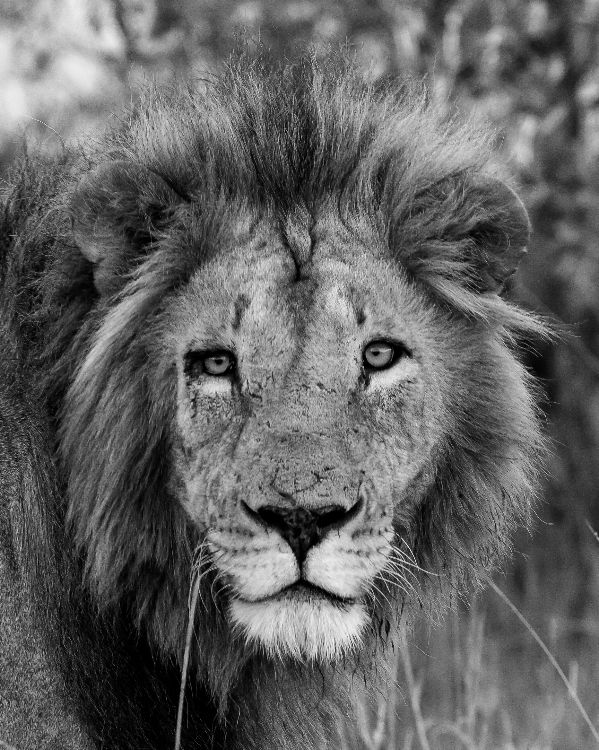 The lion is the most majestic of all the animals in the Masai Mara, Kenya. After 5 days of no sightings due to weather, this king of the pride came into view. The battle scars on his face are a lasting reminder of his struggle to the top. The full face and eye contact on this shot highlight his confidence and what felt like arrogance, as he stares down the lens in the knowledge that he is the ruler of this environment.

Another aspect of wildlife photography is the natural environment that the subject is in. It becomes very tempting to zoom in close to the animal for them to fill the frame, but don’t forget to capture the surroundings that you and they are in. 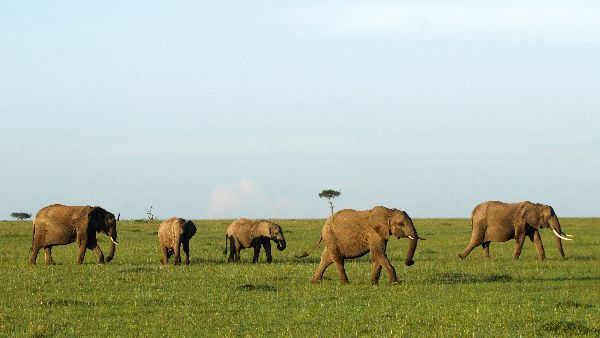 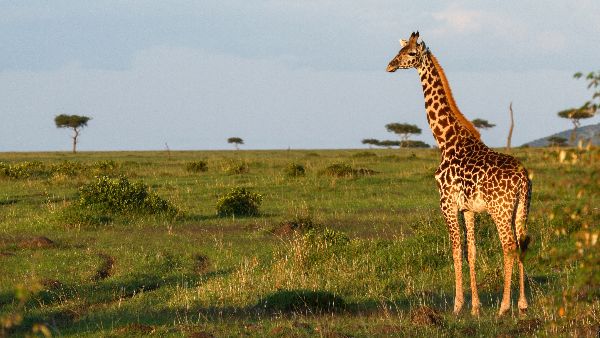 The habitat of the animal is also important as this is what allows them to live and exist. Images showing this document not only the wildlife but the often stunning surroundings that they have. The above two images show African elephants and a giraffe as they go about their daily life in the middle of the Kenyan plains. Whilst not close up, they show the scale of their surroundings.

In contrast to the above, wildlife portraits will focus solely on the animal without any distractions. Where possible, portrait shots look at their best when shot at the subject’s level. This isn’t always easy and care should be taken no matter what the subject is. The animal should always be the prime concern, so if taking the image means disturbing them or putting them under stress, then the shot is best left untaken. Research and a little prior knowledge of the subject is also important. 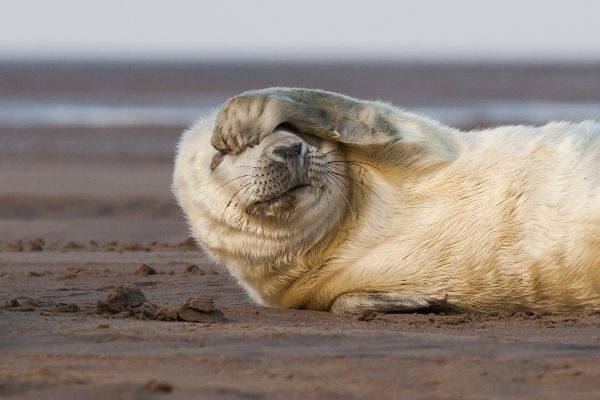 This grey seal pup is only a couple of hours old. Having watched the birth by lying in the wet sand some distance away I was able to capture this moment. A couple of important facts were crucial to know before this image was taken. It would have been tempting to have moved closer to the pup after it’s mother had moved away for a rest. However, the male seals can move fast and if they spot a pup in distress, will attack very quickly so the surroundings had to be monitored at all times. Also, if human scent attaches to a pup, the mother will disown it, meaning that at such a vulnerable stage it would surely perish. This knowledge, allowed the image to be captured whilst preserving the safety of the subject as no picture is worth the harming of any animal. 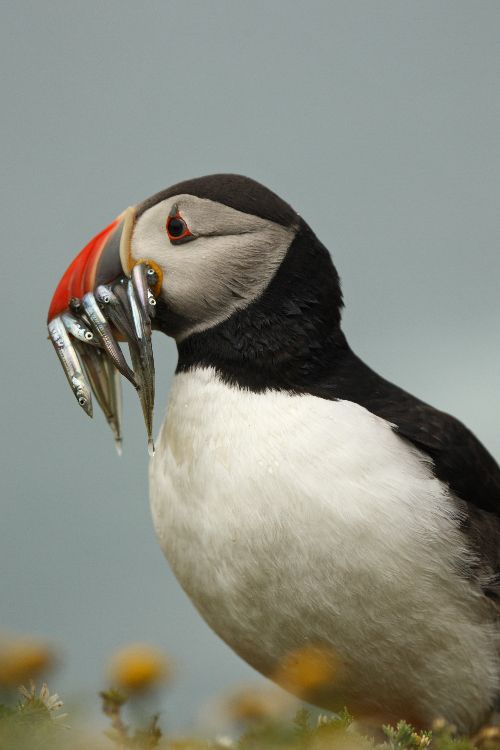 Puffins are quirky birds and during the fledging season work tirelessly to feed their young on sand eels whilst they grow in the ground nests. This portrait was shot from a lying position amongst the coastal flowers. The puffin had just landed with its latest catch giving a great, iconic image. Photographing this scene from a higher viewpoint would not have given the tight, eye level shot I was looking for. 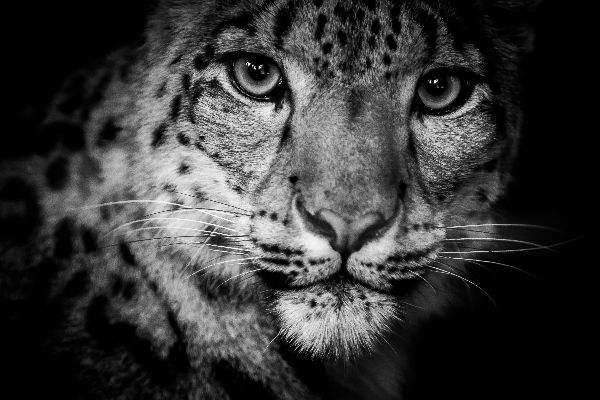 This image is a portrait of a Himalayan snow leopard in captivity. It was shot through glass and took many attempts and a long time sat on the floor whist other visitors came and went, but well worth it.

It’s not always possible, but a clean, colourful background can really isolate the subject. 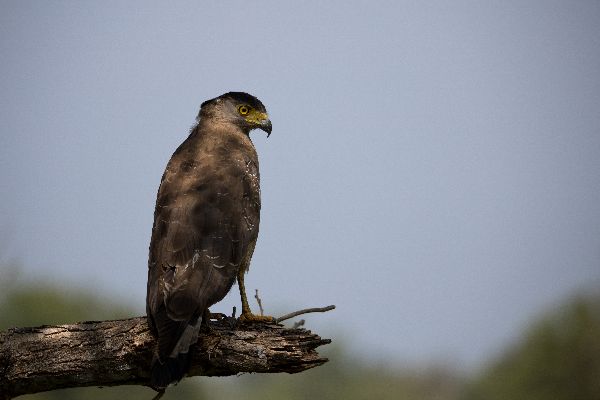 The above image was taken from a long distance using a focal length 600mm. Being slightly lower than the subject gives the opportunity to use the clean blue sky as a background so that only the Serpent Eagle and the branch are in view. The subject was placed slightly left of centre in the frame. Due to the direction it was looking, it gives an area in the composition for the bird to ‘look into’. A central placing of the subject would have had less impact and shown too much of the branch which in turn could be distracting. 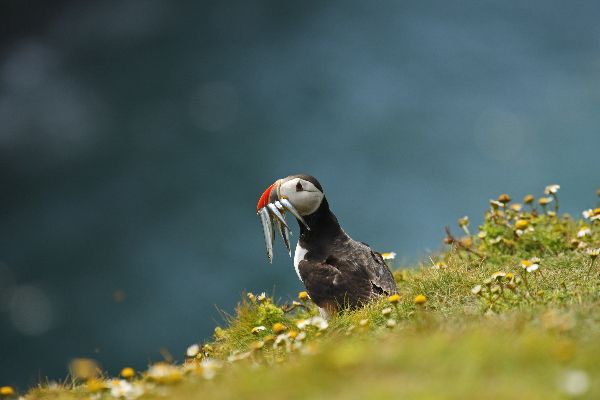 The above is another Puffin image, but this time the bird was slightly lower. By shooting from a low angle looking slightly downward, the blue sea gives a great background. Having the subject smaller in the fame also breaks up the line between the green foreground and blue background nicely.

Probably the hardest aspect of animal photography is capturing action. It usually lasts a split second and is all too often missed. To enhance your chances, firstly make sure that the shutter speed is high enough to capture the moment. When watching the subject, keep watching through the camera viewfinder, refocusing constantly and keeping the finger on the shutter button. Also, have an awareness of the surroundings as something may be about to happen from outside of the frame. 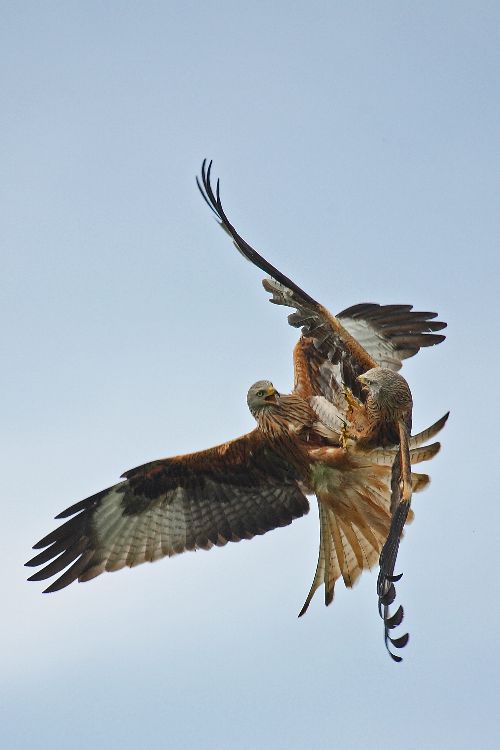 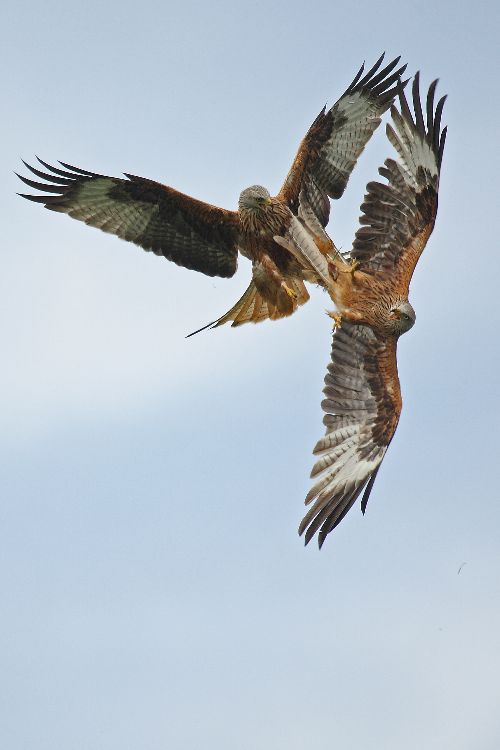 The above two images are of Red Kites fighting in mid-air. Whilst tracking and photographing one of the birds who had just picked up some food from the ground, a second kite came in to take the food away. The food was dropped and a very brief aerial fight broke out. This scene was only captured due to keeping the view through the viewfinder and finger on the shutter. It lasted for only a second or so but the resulting images are full of drama and rarely photographed.

Animals are fantastic subjects to photograph and very often the most rewarding. They offer many challenges but if you are privileged enough to enter their environment, then wildlife images can be greatly satisfying. Armed with a few basic tips and a little pre-planning can increase your chances of returning home with some ‘once in a lifetime’ photographs.

That said, captive animals should not be dismissed. If they are photographed well, they can still produce some stunning images and at a fraction of the cost of travelling. The UK has some great locations for both captive and wild animals and there is usually something on everyone’s doorstep.