One on my most favourite and popular images I’ve taken is ‘Stilt Fisherman’, taken on location in Weligama, Sri Lanka.

I am a strong believer in planning and researching future photographs before I leave for a new location. I would always rather spend the time on location getting that one memorable shot rather than wandering around shooting everything with the mindset that if I take lots of images, one or two of them will be usable. It’s better to take an hour for one shot than take 100’s of shots in an hour. This makes post production easier and the final image more satisfying, and generally much higher quality.

Before I left for Sri Lanka, I had seen many images of the iconic stilt fisherman. The images I saw on the internet, stock libraries and books were all very similar. I wanted something different. I planned to take an image that was creative and new. Having looked at the environment (the ocean, waves, sky and subject) I decided that rather than have a ‘freeze frame’ image, I wanted to smooth out the water around the fishermen. To do this I needed to have a slow enough shutter speed which would be difficult in the usual bright conditions on the beach. With the planning done, I was ready with an idea in my mind of how I wanted the picture to look.

On the morning of the shoot, the sky was cloudy and bright – not the expected blue sky I had seen in many images I had researched. This also meant that the water wasn’t its’ usual blue either, but a grey colour with only the white of the wave tops to break it up. We spoke via our guide to the fishermen and told them that we wanted to take some pictures of them on the stilts. After some negotiations, they went out into the sea and began to pose.

As well as the unplanned weather, another complication was the fact that the fishermen didn’t appreciate or understand that whilst the shutter speed was very slow, any movement by them would make them blurred. Numerous shots were taken, with me and the guide calling to them and holding our hands up to be still during the exposure process – after a while they obliged and I managed to grab a couple of images where they were motionless apart from the slight movement of their fishing rods. 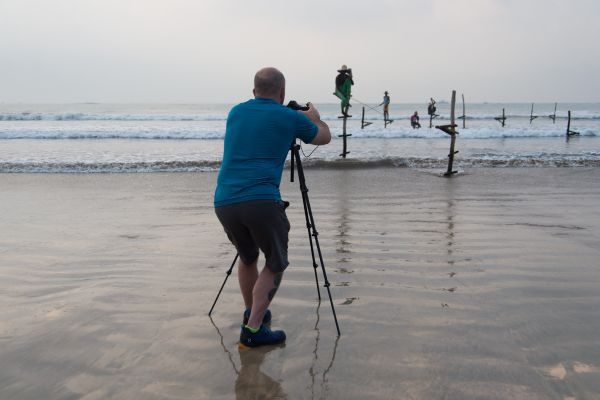 The above image shows me set up on the beach with the subject framed – the murky conditions are evident.

The final image was captured using a Canon 1DX Mk2 and 24-70mm f2.8L lens mounted on a Manfrotto BeFree One Tripod (ideal for travel as it is small and light but will take a full size DSLR and lens quite easily). A cable release was attached to the camera as the exposure time would be quite long. ISO was kept to 200 but in the bright conditions the shutter speed was still too high to create the effect I wanted. The remedy for this was to add a Hoya Pro ND filter which gave 10 stops reduction. This made the exposure time 13 seconds at f4, ideal to smooth the sky and water. 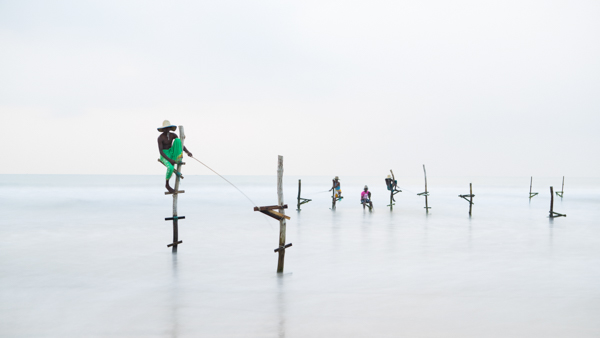 The above result was processed through Adobe Lightroom. The original shot was RAW. A few minor tweaks to contrast and highlights were made – I prefer to get the image as close to how I want it ‘in camera’ rather than spend hours making adjustments on the PC.

There are rare occasions when you really connect with an image, and this was one of them. After the planning, researching and dealing with the unexpected conditions, even in the car back to the hotel, I knew I had captured one of my ‘bucket list’ shots. It’s not just the image, it’s the experience of being in such a beautiful location and spending the time to think and capture a memorable moment that, for me, makes travel photography so fulfilling.


All images featured within this article are available for purchase via digital transfer, photographic print or on Aluminium Dibond (perfect for wall displays).
To discuss your requirements or to book a photography service please use the ‘Contact’ page.