It’s true that many images should be colourful and bright wherever possible to show the remarkable features and experiences that can be had amongst different locations, cultures and subjects. Some areas particularly are a feast of colour such as India, Sri Lanka and the Far East with bright clothing, statues, buildings and temples not to mention the scenery.

That said, some subjects can be enhanced after the shoot by converting the image to black and white. Not all scenes or pictures benefit from this conversion but others actually become more visually appealing and have greater impact in monochrome. I tend to know, even before pressing the shutter which images will finish up as black and white. I generally look for the type of composition or scene that will work best for this. Some examples of images that look great with a little post processing are people (close ups of old, weathered faces), some city street scenes, buildings and geometric patterns which can make for stunning ‘abstract’ images and certain wedding situations. I look at a scene and visualise how I want it to look after conversion before taking the shot, it’s not just a case of taking the pictures and then after loading onto the computer trying out which ones look good without colour. Sure, this can be done, but usually those shot with B&W in mind at the time always look the best.

Most DSLR cameras these days have an option in the menu to actually photograph in B&W. This should be avoided and I would strongly recommend to always shoot in colour. The reason for this is so that when the processing is being done, the subtle tones can be changed much better. 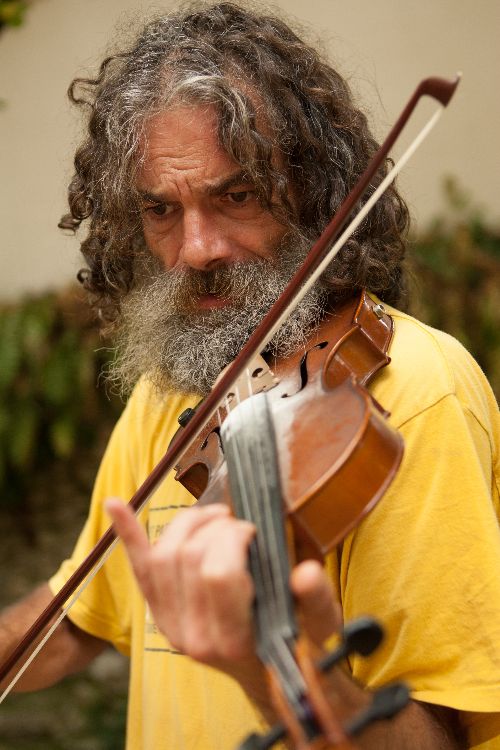 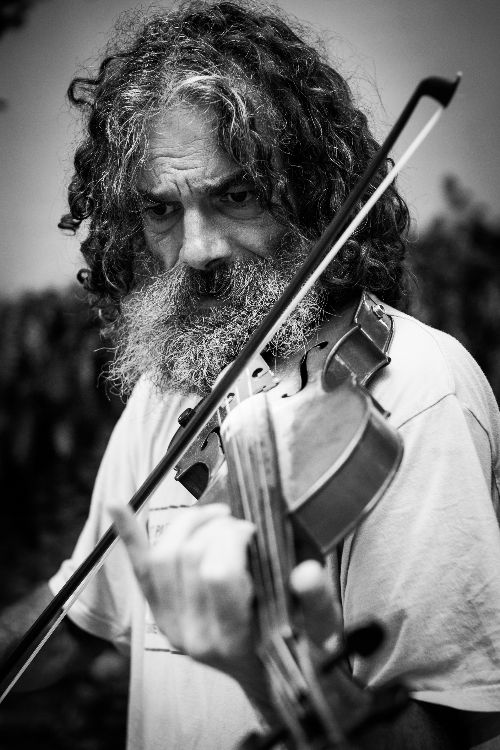 The above image was taken in Gerona, Spain. A busker was playing in the gardens behind the cathedral. I could see at the time that the combination of his yellow shirt with the green and beige background would be very much the same. Also, his face with that look of concentration framed by wiry hair and beard was perfect for B&W. The image was shot from a low angle and using an aperture of f2.8, the depth of field leads the viewer along the instrument and straight to the face, which is the main focal area of the composition. The background is also sufficiently out of focus so as to not be a distraction. The image was shot in RAW, then converted in Lightroom. Initial B&W conversion was then followed by subtle tweaks of contrast, highlights, blacks and shadows to get to the look I wanted. A very small amount of vignette was also added to frame the subject a little more. 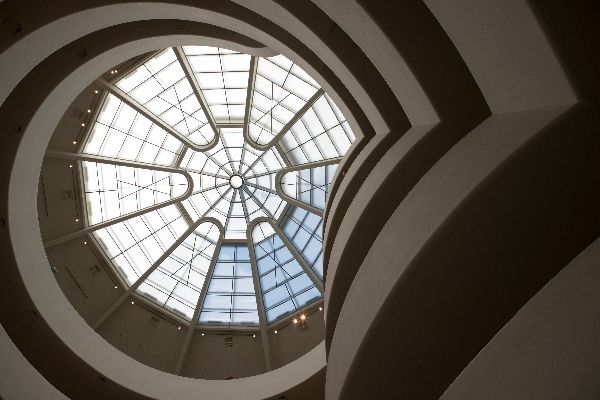 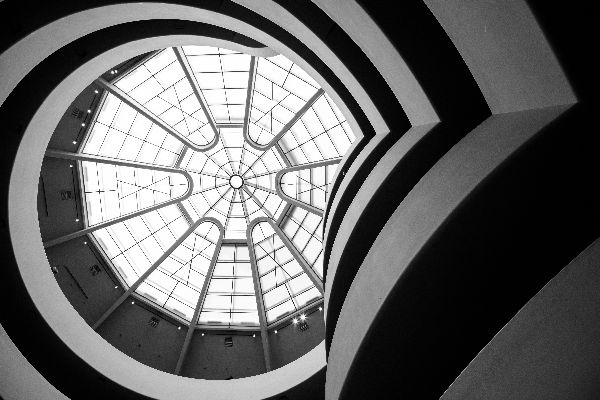 The Solomon R Guggenheim Museum in New York is a work of art in itself. The structure, both exterior and interior can be more appealing than the actual art within it at times. The internal spiral walkway which leads from the ground to the top floor is perfect for an abstract type image with its bold shape and minimalist colouring. The above was shot with the immediate intention of a B&W final image. From ground level shooting vertically to the large skylight, the shapes were offset so that nothing was symmetrical. The colour original shows the cloud and blue sky through the roof and the cream interior walls. In itself, the image is fine but to get that more striking look, a few adjustments were made. Conversion in Lightroom included adjustments to boost some areas of highlight, darken some blacks and shadows. Care was needed not to overdo the tonal changes otherwise the detail of the glass roof and the lights around it could be burnt out. 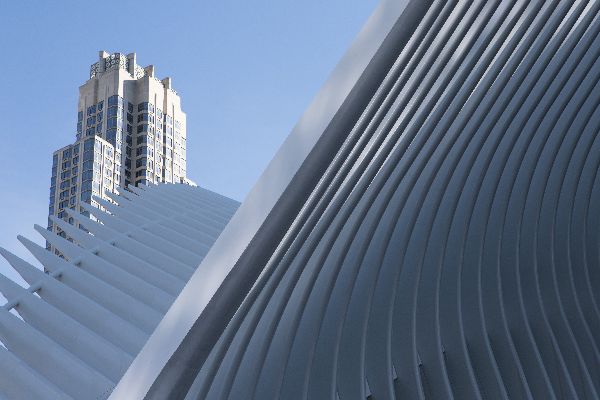 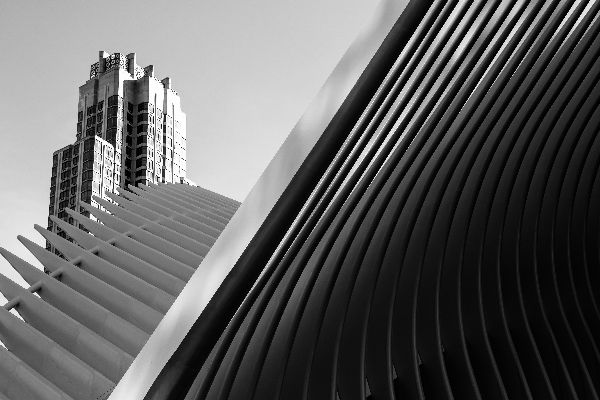 This image is the $4 Billion Uculus Shopping Mall and Train Station at the World Trade Centre New York. The image was shot to accentuate the ultra modern lines in comparison to a traditional skyscraper. Only a portion of the building was needed as the full exterior scene was invaded by construction, buildings and tourists. It was taken with a clean B&W final image in mind. The sunny day gave great shades of light and dark but due to the colour of the structure, the inevitable blue caste was always going to be an issue. The colour original shows that the lighting and entire image is very blue and lacks impact. Back in Lightroom and after B&W conversion, the highlights, blacks and shadows were tweaked to give a much stronger image. 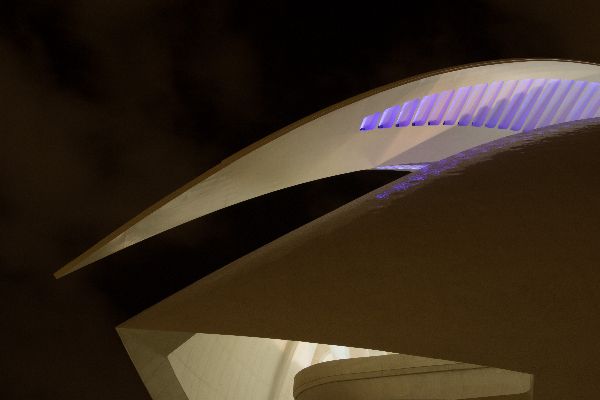 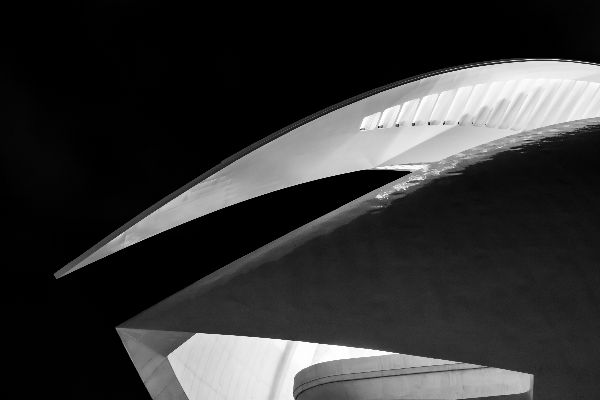 Valencia, Spain and the Palau De Les Arts Reina Sofia. The building is an imposing sight and resembles something out of a science fiction movie. This was shot at night using a tripod. The colour original is still a nice shot with the purple lighting and the softened cloud in the sky. However, due to the amount of artificial lighting, the image lacks real ‘punch’. I had already photographed the whole building, but wanted a more interesting and unusual, detail image, again shot solely with B&W in mind. The conversion and adjustments in Lightroom have eradicated the clouds and given way to a simple and bold abstract.

Weddings can often look great in Black & White. Standard shots are best left in colour but others can look better when converted. The two shots below were taken during a winter wedding with B&W in mind during the shoot. The weather was dull and cold and the snow made the colour shots seem almost monochrome anyway. Then, with a little processing, the result is a really nice addition to the album. Reportage style wedding shots also look great when converted and can very often look better due to the style of the picture. Having a second camera aimed at the group whilst the ‘standard’ colour image is taken gives a more informal appearance and when treated to a B&W conversion make for the perfect ‘story telling’ aspect of the day’s shoot. 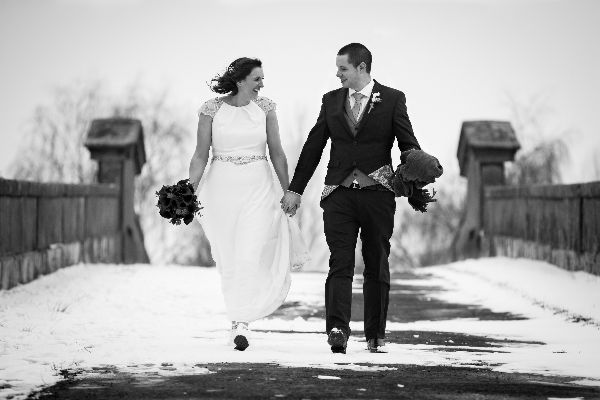 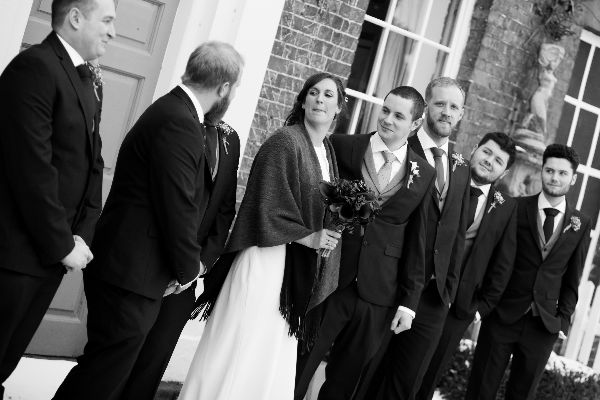 If you think about B&W before the shot, the final converted image will always be better. As with all photography, the difference between a ‘nice’ picture and a great image is to take a step back, think, plan, visualise and then shoot.


All images featured within this article are available for purchase via digital transfer, photographic print or on Aluminium Dibond (perfect for wall displays).
To discuss your requirements or to book a photography service please use the ‘Contact’ page.